I wasn't very happy with the Qt documentation, which was then written using LaTeX macros and already obsolete. I was also an opinionated asshole and far too sure of myself, and I'd just learned about Donald Knuth's literate programming techniques, but I hadn't read his book. Naturally I looked at the existing litprog tools (there were quite a few) before discarding them all to write something good.

By good, I meant that it would never require anyone to keep things in sync manually — if a function was private, the documentation tool would know that from looking at the code. It would not require editing header files often, because when header files change, compiles are slow. It would generally make things easy for the programmers. It would not be a storytelling tool, it would document individual interfaces. It would not include the source code in the documentation, because in my opinion that leads to undocumented dependencies, as people notice and use random quirks. And so on.

The first version of qdoc was written in two days, just before I joined Trolltech. It was a hundred-line perl4 script. Eirik and Haavard (Trolltech founders) looked at it, looked at the result and agreed that it would be a good idea to discard their hard documentation work and start from scratch based on my ideas. (They were right, and one day, I hope that I too will be as egoless as they were.)

The second was a new perl script, this time written in perl5, which had just come out. It slowly grew, one good idea at a time, to 2500 lines of job security. The script did a magnificent job, but I'm not proud of it. Too much job security.

The others at Trolltech would occasionally suggest releasing qdoc, since it did such a good job and there was nothing free that worked as well. I refused, arguing that qdoc was unusable for strangers — when something went wrong, often I was the only person who could understand the error message. Trying to use it without access to me would be a nightmare. Trying to support qdoc via email would be a time sink.

Sirtaj S. Kang, a KDE developer, let himself be inspired by qdoc to write something similar called kdoc. I remember looking at it briefly. I don't remember much except that didn't support all the features we needed at Trolltech, and I thought it was far too flexible for my taste. (I don't want flexibility, I want a tool that does the right thing, and sometimes that means being inflexible with the developers.)

Around the same time, Dimitri van Heesch reimplemented qdoc. He saw the markup in the Qt source and wrote a C++ program, doxygen, which took the same input and produced the same output as qdoc, as far as that was possible.

Some of the documentation source code wasn't publicly accessible yet. Trolltech decided to release that source when Dimitri asked for it and there seemed to be no reasons against doing so. Here are all the hackers making that strategic decision. 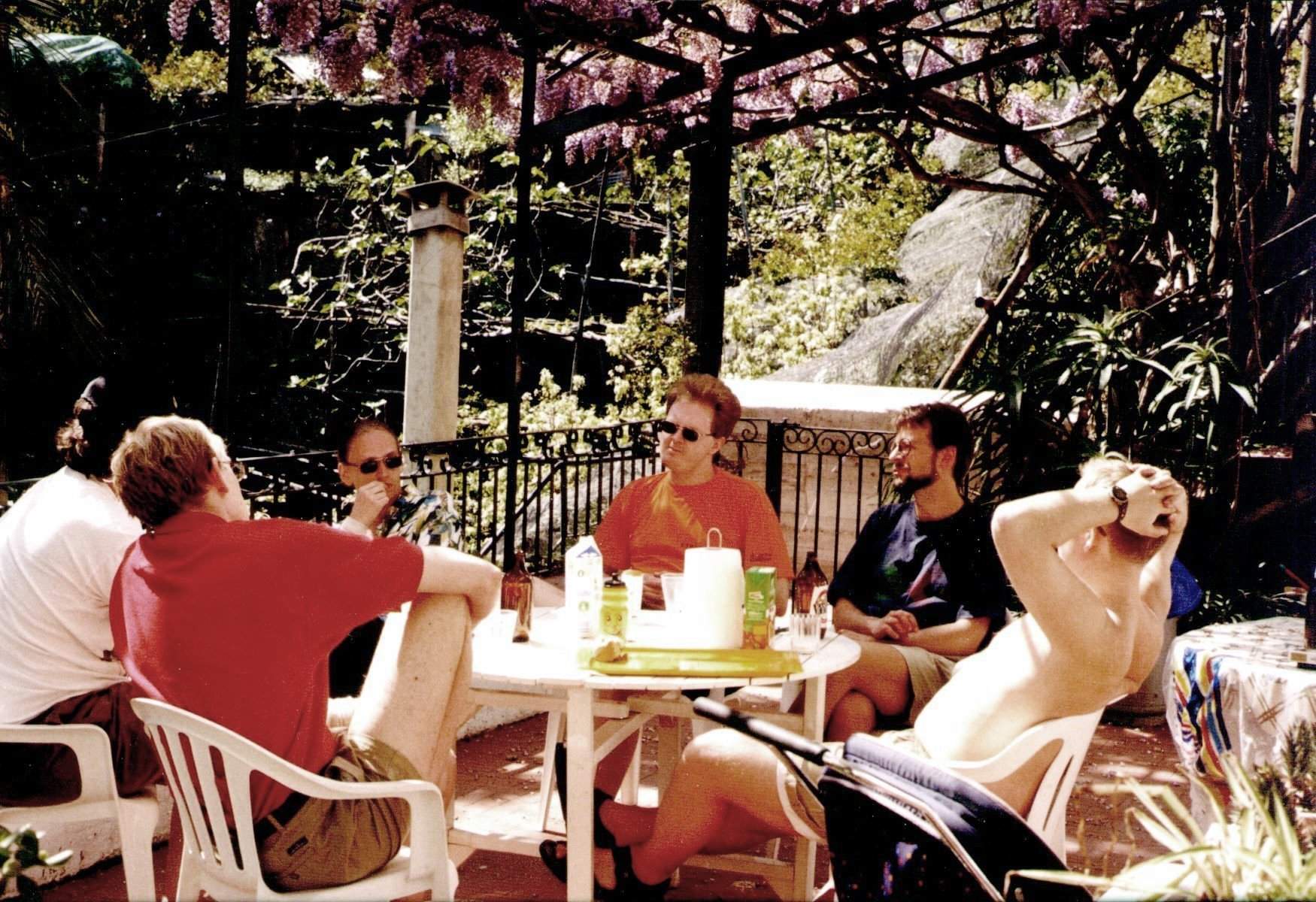 Starting from right: Haavard Nord in notverymuch, Eirik Aavitsland in dark blue t-shirt, Eirik Chambe-Eng in reddish, then I biting my nails, finally Warwick Allison and Paul Olav Tvete. It's a pity my shirt isn't visible, it was fabulously colourful.

At Trolltech, we never used doxygen. At first because it couldn't handle our tutorial, later because of it was developing in a different direction. I suppose there were other reasons as well, but I don't remember any details.

After a while, Trolltech grew to a point where we could think about spending time on a new, maintainable, version of qdoc. Finally Jasmin Blanchette did so in C++ when he started at Trolltech. His version was a great deal better than my perl monster. It was a relief to finally kill that perl.

Jasmin's version grew a vast feature set, and eventually was released as part of Qt, in the qdoc3 directory.