The simplest form of question is a yes/no question. How many kinds of answers does that permit?

There are eight kinds, as I count them. There's yes and no, including lookalikes like yes, in my opinion or most probably yes. This is about kinds of answers, not details.

Three more kinds of straight answers: neither, both and not 100% straight, it depends. (Some yes/no questions don't allow neither/both.)

The sixth kind is to talk about the question, for example you've heard a politician say that's a really interesting question and blah on without answering.

The seventh is to talk about the answers, for example by talking about the merits of yes/no without stating an opinion. That can be informative and helpful, and it can also be a an unobtrusive way to stay vague or avoid commitment.

The last of my eight kinds is to talk about something else. Change the subject, make a joke, suggest that now's a great time to break for lunch.

The classification above is one I've dreamed up myself, mostly drawing on my experience as a parent. Can we go swimming tomorrow after kindergarten? is a very serious question, and I've thought a great deal about how my answers raised my children. If you had other plans for tomorrow, that question allows all eight kinds of answers. Try to answer it in eight ways now, as an exercise.

I didn't go through that sort of exercise in school. That's odd, isn't it?

When I learnt languages in school, I was taught many words, and I also had to practise sentence analysis. I learnt how to find the verb, I learnt what propositional clauses are, I learnt that some statements are questions, some are statements, some quote openly, some quote in another way, some are orders, etc. A lot of classification.

Geography was more than just where things are, we also studied the processes that led to that, so I know why the Rift valley is special, it's not just another valley like so many beautiful valleys all over the world.

But although we discussed many things during school and answered uncountable questions, we weren't taught about kinds of answers, not at all. We practised answering as a matter of pure practice. Like learning a language with just words and speech, without any of that classification. Or like learning math by rote, without reasoning.

This makes me unhappy. My children went/go to a school that places great emphasis on discussions, presentations, all the practices of modern office work, and they don't learn any of this either. The school pays someone titled persuasion/presentation coach, who was quite surprised when I asked about this. The children learn to speak at the appropriate speed and volume while presenting something, and to listen and ask followup questions. They don't practise answering those followup questions in different ways. The coach doesn't tell the presenter try again, can you answer that question without committing yourself?

Linux on a Huawei Matebook

A Huawei employee suggested to me that the Matebooks would be good for my kind of use. I want something small enough to fit comfortably on my lap, and I use the laptop as a terminal and text editor. I took his advice, bought the 16GB 13" model, and it's great.

What a keyboard, what a screen, what a touchpad, what perfect linux support. That's all I have to say.

This rather lengthy posting started when I read Schopenhauer's little book about rhetoric. The book is great, I particularly like the smoothly satirical preface. He describes about forty dirty tricks, and as I read I realised that I've heard every single trick in scrum meetings etc. I think some of my past colleagues would nod as they read Schopenhauer's preface: Nobody absolutely knows yet, but later, with the benefit of hindsight it may become clear that I was right today, so it's best for everyone if I have my way in this meeting.

Rhetoric (/ˈrɛtərɪk/) is the art of persuasion is Wikipedia's first sentence on the subject. When people use the word, they often don't use it to mean exactly that, though. Sometimes it means an argument or an opinionated statement, sometimes a choice of phrasing, sometimes wording with more elegance than substance, and quite often the word rhetoric is used to mean any device that's used to win a discussion except by achieving a shared understanding of the subject matter.

That isn't what Aristotle had in mind. I don't think Aristotle ever used dirty tricks such as the door in the face, the Gish gallop, guilt by association, or making jokes about other participants in a discussion.

Books on rhetoric study, analyse, categorise and explain rhetorical devices, which are means to persuade, or if not persuade, at least to carry a meeting. Today I want to speechify a bit about using the same field of study, these same devices, in three other ways: ⓐ Listening more attentively to what others are saying, noticing unfair rhetoric, ⓑ countering or neutering that unfair rhetoric, and ⓒ staying fair.

Below you'll find Schopenhauer's dirty rhetorical tricks, grouped and worded as I see it. I describe each (fairly or unfairly), mention an agile software example to help you learn to notice it when someone uses that dirty trick, and if I can, I write a bit about how to counter that trick while staying fair and within a normal software development context. […More…]

I read this a few years ago:

In Gurri's telling, High Modernism had always been a failure, but the government-media-academia elite axis had been strong enough to conceal it from the public. Starting in the early 2000s, that axis broke down. People could have lowered their expectations, but in the real world that wasn't how things went. Instead of losing faith in the power of government to work miracles, people believed that government could and should be working miracles, but that the specific people in power at the time were too corrupt and stupid to press the CAUSE MIRACLE button which they definitely had and which definitely would have worked. And so the outrage, the protests — kick these losers out of power, and replace them with anybody who had the common decency to press the miracle button!

So for example, Gurri examines some of the sloganeering where people complain about how eg obesity is the government's fault — surely the government could come up with some plan that cured obesity, and since they haven't done so, that proves they're illegitimate and don't care that obesity is killing millions of Americans. […] The general formula is ① take vast social problem that has troubled humanity for millennia ② claim that theoretically The System could solve the problem, but in fact hasn't ③ interpret that as The System has caused the problem and it is entirely the system's fault ④ be outraged that The System is causing obesity and homelessness and postmodernism and homosexuality and yet some people still support it. How could they do that??!

I read those paragraphs and cannot unread them. In my eyes, half the protests now look like secret or unknowing demands that someone should press the miracle button.

Someone's angry that mobile phones don't last for ten years: The manufacturers keep phone lifetimes short to boost their sales! Because they're evil! And when I read it, I think of the miracle button that the manufacturers don't have.

I too started with that. A magnificent machine. Simple, with no chips to poke around and configure, so the only way to do anything was to write clever code.

I didn't realise how important the manual was until The Register quoted Steve Vickers, the author of the manual:

When I was writing the manual, the one thing I really wanted to avoid was the kind of brick wall that you can get to when you're just following along and then suddenly hit a wall where, unless you take on board a huge amount of understanding, you just can't make any progress. […More…]

Zaha Hadid at her best 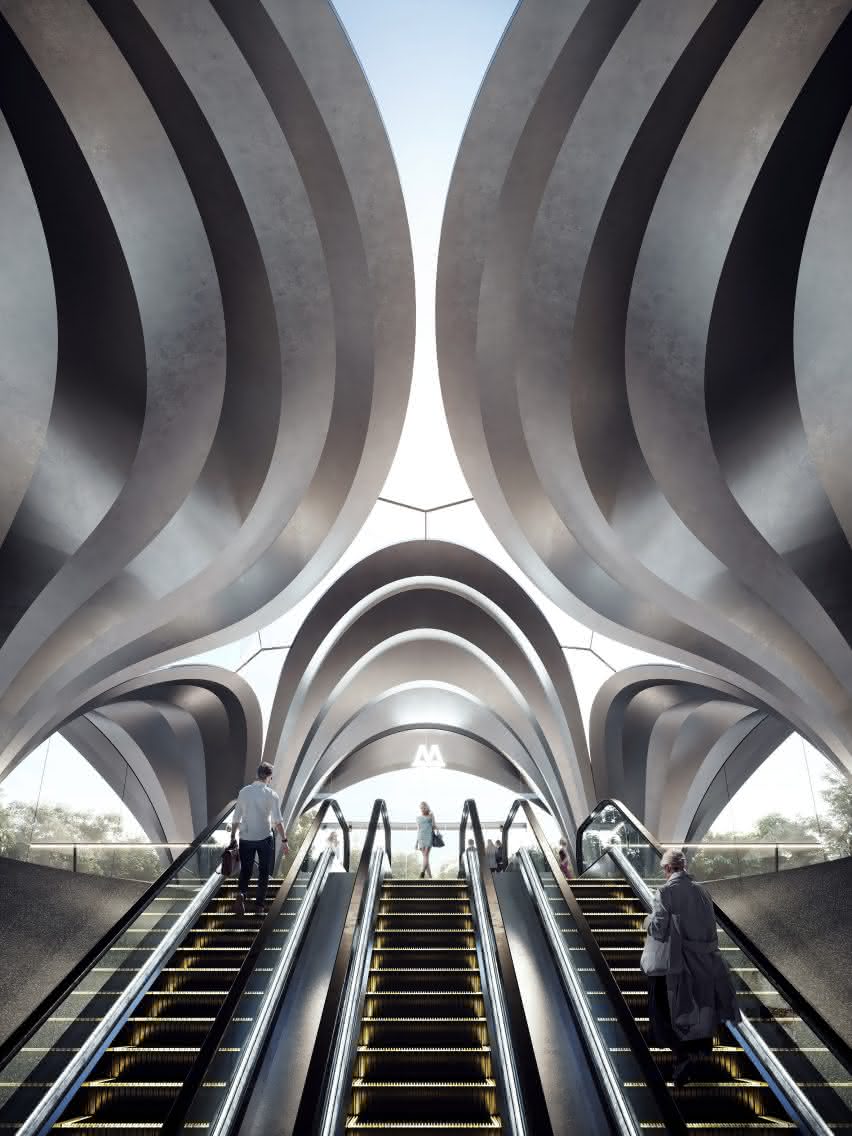 Zaha Hadid Architects is building three new metro stations in Dnipro, Ukraine's fourth-largest city. A metro station building is stairs, elevators and entrances. In my opinion the photo above is the first time that one of her sculptures really fits its purpose.

Zaha died the year the project started; I wonder whether she did any of this design herself.

The diary of an assistant mistress

Devuan 4.0 has been released, codenamed Chimaera, and it reminded me of Teri Norton, whose email address was chimera@… and who seems to be gone from the internet. What a pity.

Teri's Diary of an assistant mistress is preserved by the Internet Archive, though. It purports to be the diary of a teacher somewhere in Brtain and maybe it is. The author seems to know a thing or two about schools, at least. She also has a sex life and makes words dance. January • February • March • April • May • June • July • intermezzo • September • October isn't in the archive • November • December and an addendum, the FAQ.